Olson refuses to disclose the EAG’s funding sources or the names of its board members, other than Muskegon activist Jane Missimer, 69. While the site says it is “a group of citizens and school board leaders” it is widely assumed that it is a front group for the Mackinac Center in Midland. In fact the EAG Articles of Incorporation state:

“The corporation is to be financed under the following general plan: contributions from corporate foundations and private foundations.”

EAG uses the Aristotle Campaign Contribution website for contributions, which is designed specifically for political campaigns. Other than processing the money, it:

“…is the only company with the ability to screen the name of each contributor against a proprietary database of government records to check that the contributor is a US Voter. This service is provided to registered political organizations.”

“From the registered voter file, we’ll also tell you the date-of-birth, congressional and legislative district of the contributor, his or her party affiliation and vote history as maintained by the county or state board of elections. You’ll know more about your contributors, and be better able to target solicitations to new prospects with similar demographics.” 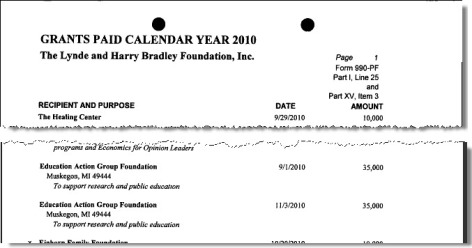 Only two contributions to the Education Action Group had been uncovered until 2014 (see below).  Both in 2010, the Education Action Group Foundation (501(c)(3)) received $70,000 from the Lynde and Harry Bradley Foundation for “Education , public education; public policy; elementary/secondary school reform.” The Bradley Foundation is among the largest contributors to conservative causes, including American Legislative Exchange Council (ALEC), a long list of school choice organizations, the The Mackinac Center, and many other state-based conservative think tanks.

The Education Action Group (IRS 501(c)(4)) is on record as receiving $50,000 from the Jaquelin Hume Foundation, a conservative group located in California, that has supported ALEC, the Mackinac Center, the State Policy Network (a national network of right wing think tanks), as well as a long list of other state-based conservative think tanks.

As its total revenues in 2010 were over $1.3 million, the remaining funding must come from direct corporate contributions, of which, there is no public record.

More troubling, the 2010 Education Action Group Foundation IRS 990, shows only  $154,641 spent on salaries for its 7 staffers.  EAG refuses to disclose who is paying the rest of its personnel expenses.

In 2011, the Gleason Family Foundation of Wilmington Delaware made a gigantic $4.8 million grant to finance EAG’s operations. Gleason is a well known conservative foundation that bankrolls a long list of extreme right causes. These include old stalwarts like the CATO Institute, a number of state Heritage Foundation franchises, including the Manhattan and the Pacific Research Institutes, the Reason Foundation and several others, as well as the Heritage Foundation itself. It also funds several anti-union operations that masquerade as unions, the California Teachers Empowerment Network and the Association of American Educators. All of this can be seen on the Gleason tax return.

But the EAG grant stands out. It is of historic proportions, even among conservative foundations. Notice also that the grant went to EAG’s 501(c)(3) apparition, not it’s 501(c)(4) or 527 versions. This means these funds cannot be spent on politics, something the pages of EAGTruth show has often not been the case.

By 2014, the list of conservative foundation funders had grown considerably: 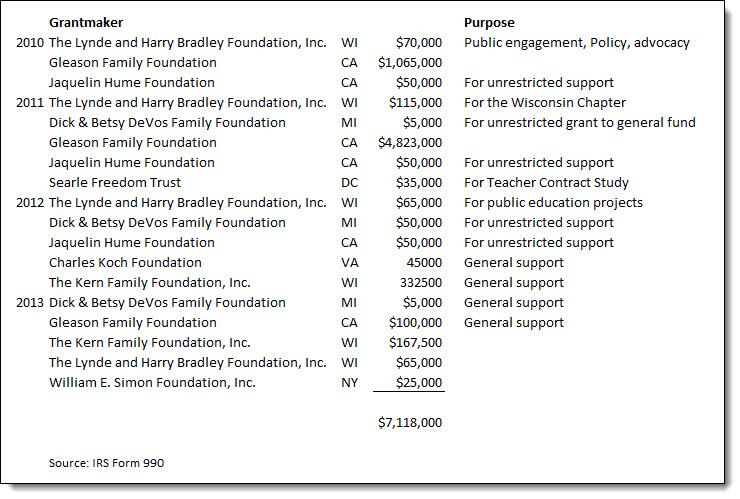